It was quite tragic when we all learned that Paul Walker, everyone’s favourite blue-eyed boy, died in a fatal car crash in November 2013.

While that left a void that could never be filled in the hearts of his family and friends, here, we’re going to be talking about the problem it left the producers of ‚Fast and Furious 7‘.

The first thing they needed to do was make necessary alterations to the script so that his character could be written out of the franchise. But, since they couldn’t just magically make him disappear, they needed to film his remaining scenes. But, how?

In step Paul’s brothers, Caleb and Cody. This is as far as most people’s understanding goes. But, there’s just one problem. His brothers look nothing like him. 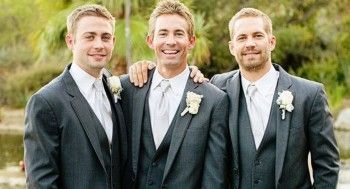 So, how did they do it? You’re probably thinking CGI right about now. But, but, but… What does that really mean? Is CGI so good that you can shoot an actor’s scenes without needing them?

It seems so. While director James Wan hasn’t revealed the exact number of scenes which were filmed without Paul, the internet feels that there are over 350 shots where Paul’s brothers stepped in for him.

Now, if a movie were shot from start to finish, the way we see it, telling the difference would have been easy. You could pinpoint the exact time when Paul’s brothers stepped in on his behalf. But hey, this is Hollywood! That’s not how it works.

While some of the shots were easy, some of them weren’t. Shots with Brian O’Conner standing in the middle of a crowd or an action scene weren’t hard. It’s the scenes where he had little to do which gave the most trouble. Shots which were focused on him alone proved to be the hardest. Here are a few of the shots from the movie where it wasn’t really Paul:

As per an article in Vanity Fair the three scenes which were the hardest to recreate were:

#1 When Paul Walker (Brian O’Conner), Vin Diesel (Dominic Toretto), and Kurt Russell (Mr. Nobody) are driving through the desert

About this scene, Martin Hill, VFX Supervisor at WETA (The company responsible for bringing Paul „back to life“), said, „Paul is trying to get to Los Angeles quickly, and is also reacting in a subtle way to the injured Kurt Russell in the backseat. The performance was very nuanced. . . . That’s a high bar in itself, to create that. Beyond that, this actor was known to millions of fans, and this had to be Paul Walker—more specifically, Walker in character as Brian O’Conner.“

It’s relatively easier to make CGI work when you’re shooting an action scene with a lot of movement or when there are multiple characters on screen. When the focus is on the CGI, and there’s barely any movement, the job becomes extremely difficult. Add to that the fact that neither of Paul’s brothers was a seasoned actor and Weta had quite the problem on their hands. They did manage to solve it though, and how.

This is probably the toughest scene yet where Brian O’Conner wasn’t just supposed to be on screen in full frame but also had to deliver dialogue with meaning. But, Weta did such a good job with it that the shot was used for the promotion campaigns of the film. Now that’s what you call „Special“ effects. Remember the below poster? That’s not Paul!

Paul probably was the best thing to come out of the Fast & Furious franchise, and he will surely be missed. Here’s the tribute scene from the movie which, we feel, is one of the best tributes given by a movie to a departed actor in history.